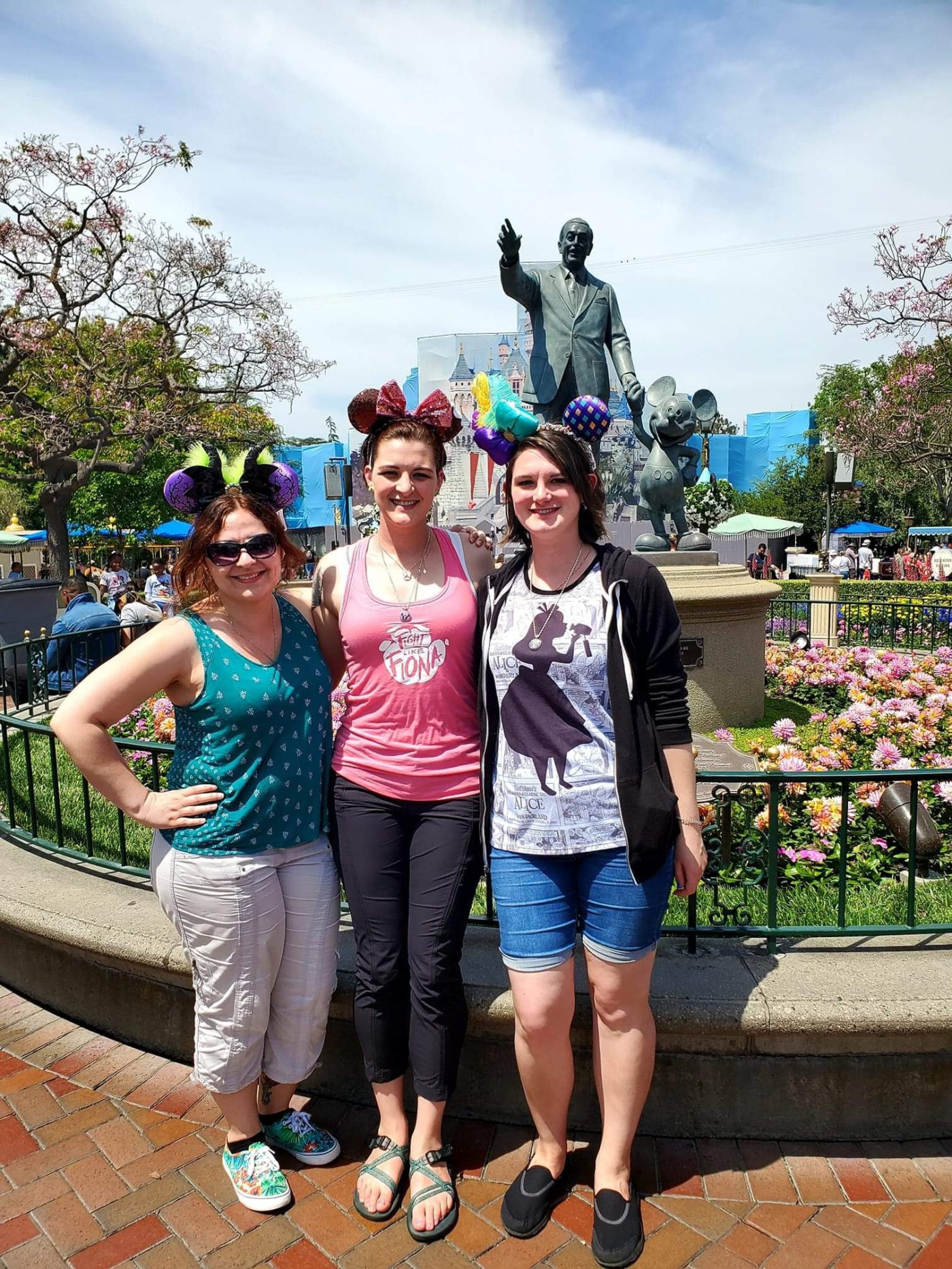 This year I visited a Disney park for the first time as an adult; and yes, it was magical. I grew up on Disney VHS tapes, all day, every day. Even now, I go to the new releases of Disney movies and quote my favorites. So I was very excited when I heard two of my friends were going to Disneyland and asked if I could join them.

I was 6 years old when I visited Disney World. All I remember is refusing to go on the Tower of Terror, dancing ghosts, flying through stars for a brief moment, and feeding the birds that would come up to our hotel patio. Now I’d be able to relive some of these experiences and see how Disney fared for adults.

We planned our Disneyland trip so we had 3 full days to explore the parks. To do this, we flew to California on a Monday and flew out Friday and used our 3-day hopper passes for the days in between.

After checking into our hotel, we decided to explore Downtown Disney and map our route for the next day. It was a bit confusing to find the entrance to Downtown Disney, but once we found it, it was a 15-20min walk from our hotel. Our plan was simple: arrive before opening and close the park down.

I had one important mission throughout this trip: find really obnoxious Minnie ears. The park was buzzing with the “Get Your Ears On” celebration. Despite the name of this event, I was rather disappointed in the selection of ears and if I had more time before the trip I would have made my own. However, after a day and a half we each found a great pair of ears and wore them throughout the parks until our temples hurt.

We found the largest selection at the Mad Hatter. Most of the ears can be found in any number of stores throughout both parks and Downtown Disney, but this one had the majority of them.

Bright and early the next morning, we ate our breakfast at the hotel and set out about an hour before the park opened. Due to Magic Morning/Extra Magic Hour it was difficult to figure out where to stand with all the lines. At the gate, they gave me a paper ticket when they scanned my e-ticket. This is important as I had to insert my park ticket into the fast pass machines. Once inside the park, we rushed towards Frontier Land. After waiting a few more minutes for the park to fully open we ran for the Indiana Jones ride.

We got into the line for the ride, but as soon as we could see the troop transporters the ride temporary closed due to some technical issues. After waiting a few minutes, we decided to head to other rides before the lines got much longer.

Grabbing a fast pass for Indiana Jones, we checked our Disneyland app for wait times and headed to splash mountain. Typically all the water rides had low wait times in the morning. If you’re willing to dry off throughout the day then these are great to go to first. Throughout the day, we tried circling back to Indiana Jones when the app told us it was open again, but it took 2 more tries before we could actually ride it.

We spent about 12 hours riding rides throughout Disneyland and running around to grab fast passes when we could. By the end of the day (roughly 10-10:30pm), we were exhausted and crawled our way back to the hotel.

The next day, we got to the park entrance about 30minutes before opening. Deciding to start off in California Adventure, we tried to run for Cars Land hearing the Radiator Springs ride was worth the wait. However, by the time we got there, the wait time was already over an hour and a long line was in place for obtaining fast passes. Fast passes were no longer given out by 10:30am. We kept an eye out on wait times, but the ride was only under 75 minutes when it temporary closed.

We finished the rides we wanted to go to by around 4pm and went back to Disneyland for more rides and a show at the Royal Theatre until our dinner reservation at 7:30pm. Surprisingly, both park and Downtown Disney restaurants had a huge variety of gluten free options (great for my two Disney buddies). When checking in or making a reservation you can indicate allergies and they are very attentive of your needs throughout the meal.

The food is pricey like any theme park, but still good. There’s enough variety in prices and food options for which ever type of budget you have. We tried to eat cheaper during the day and have a nicer dinner.

Between taco trucks, popcorn, and Mickey shaped beignets and pretzels, there was a lot of snack options. In hindsight it would have been cheaper to buy snacks from a store so we buy food less often, but we enjoyed everything we had. We also had a great time trying Disney’s juleps. They are non-alcoholic in the Disneyland park but come in different flavors depending on where you find them. Our favorite was, by far, the Jungle Julep found by the Indiana Jones ride.

If you’re looking for drinks with a little more of a kick, you can find them all over California Adventure. Again, pricey, but a frozen margarita can do wonders on a hot day.

We had another fast pass for the Indiana Jones ride between 8-9pm, but due to our reservation being late we almost missed our time. Turns out the would have honored our fast passes even without our sprint through the two parks.

On our final day we decided to use our Magic Morning. This gives individuals who buy passes that are three days or more or guests of disney hotels the ability to enter the park an hour before general opening. As soon as they let us in, we ran for the Peter Pan ride (and weren’t the only ones) as that ride had one of the longest wait times throughout our time at Disneyland. Only part of the park is open for Magic Mornings so be sure to plan ahead.

We spent the rest of the day catching rides we really wanted to go on again or for the first time and watching another show at the Royal Theatre (highly recommend! Very funny). We also caught the parade and the “Get Your Ears On” light show, music, and fireworks. Disney really knows how to send you off with a bang.

Disney has plenty of magic for both kids and adults wanting to unleash their inner Disney Nerd and we certainly took advantage of everything they had to offer. Now after 3 full days of constant park exploring for 12 hours a day we are ready to rest our aching feet.

Disneyland app
-Download it! While it’s sometimes not completely up-to-date, it’s a great way to plan your day. You can make reservations, upload your tickets, mobile order food, and keep track of your fast passes. You can also use it to locate restrooms and restaurants near you. I wish that you could star rides to get notifications on wait times, but other than that it had many great functions.

There is a function on the app where you can get fast passes instead of going to the booths. It costs about $15 so decide if it’s right for you. The booths are free, but you have to run to specific rides to grab a pass.

I want to mess with this app more. You can put all of your group’s tickets on one but I’m not sure if this means only one person would need to pay the extra $15 or if it’s per person.

Target
-When looking at cheaper ticket options, the best I found was Target. At the time I bought my 3-day hopper pass, the adult tickets were the same price as kid tickets and you could still get money off through your Target Red Card. However, my pass expired earlier than the others in my group so you’ll want to buy these closer to your departure date.

I also bought my Disney giftcard through Target and saved money that way as well.

-So worth it. We may have been running back and forth across the park, but we saved a lot of time not sitting in lines. Even when the fast pass line is long it will still move much faster than the standby ones.

You cannot get fast passes during Magic Morning. The app allows you to check what time a ride is giving fast passes for. We only had one issue which was when the fast pass machines were down for Roger Rabbit and the app did not inform us.

Check your fast pass reminders to see when you can get another pass for the day. The app does not tell you.

If you miss your fast pass time ask the ride operators if they will still honor it.

5 thoughts on “Disney as an Adult!”